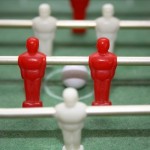 A great deal of our most difficult conflicts appear to be identity-based: Israeli vs. Palestinian, Democrat vs. Republican, Christian vs. Muslim, and so on. Identities are pitted against one another in a win-lose fashion. The intransigent nature of so-called identity conflict has understandably lead some to conclude that we must transcend our concerns over identity in order to resolve the deep conflicts that plague our societies. Yet research on identity and conflict resolution suggests that it’s premature to toss the baby out with the dirty bathwater.

In an earlier post I addressed the importance of complexifying identity in order to foster tolerance for others. However, what about the relationship between identity and pro-social behavior? Addressing this question, Mark Levine conducted a creative experiment examining the association between identities and helping behaviors in emergency situations.

Levine and his team had British Football fans recruited to be in the study. Specifically Manchester United (MU) fans (all male) were selected from a larger sample of football fans. Each was given a questionnaire regarding how much and in what ways they liked their favorite team. They were also required, in each question, to write down the name of their favorite team.

After filling out the questions and having their identity as MU fans activated, the subjects were asked to go to another building on campus to do the 2nd part of the study.

On the way a student (a confederate), would run by and pretend to fall and hurt his ankle. Three research assistants were hiding in the bushes (like Good graduate students!) and observing what was happening. The runner was wearing either Manchester United (in-group member), plain white (no visible social category) or Liverpool T-shirt (rival out-group member) jerseys.  What were the helping rates?

Incredibly, after the subject’s identity as MU fan was primed, he/she was far more likely to help out a person within their own in-group than otherwise. This is a depressing finding.  However, it should be pointed out that although the study clearly demonstrated effects of in-group favoritism, social category information did not produce out-group derogation.  In other words, subjects were not less likely to help those wearing the Liverpool shirt as those with a plain white top (an outcome that is somewhat surprising given the intense rivalry between MU and Liverpool fans).

Next, Levine conducted a second study with the same methods, but subjects were primed to activate their identity as football fans, not specifically MU fans. What were the helping rates?

The findings from the study suggest that helping behavior is more likely when we perceive the recipient belonging to our in-group. This is all the more so when a certain identity is activated and made salient.  Fortunately, as the second study shows, most people have enough layers of complexity to their own identity that their in-group can be enlarged to include a greater number of people.

As conflict resolution practitioners we need to recognize that different levels of identity can be activated in different circumstances. For identity, like much of life, is fluid and dynamic.