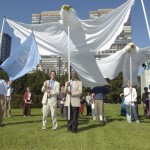 Professor Coleman spoke on a panel of experts this week at the UN's launch of the 2013 General Peace Index Report. He opened his remarks by saying. "“The GPI/PPI (Positive Peace Index) is an impressive, important, evolving initiative. It not only provides a framework for identifying, ranking and naming countries by levels of peacefulness, but also suggests a framework for designating and tracking Sustainable Peace Goals for the Post 2015 agenda. This is why the conceptual and methodological limits of the GPI/PPI must be recognized and addressed, in order to refine these valuable and vital indices.”

He then outlined three basic limitations to the indices, which included:
1)      The empirical methodology used to identify the PPI indices -  by correlating the GPI with 800 indices and then selecting and weighting those indices with the highest correlations - assumes that the GPI and PPI should be correlated – which is an erroneous assumption.
2)      The GPI/PPI are based on an overly-narrow conceptualization and definition of negative and positive peace, which are also based on erroneous assumptions.
3)      The GPI/PPI privilege the economicization of Peace.

In conclusion, Dr. Coleman offered an alternative conceptualization and definition of sustainable peace: as a state where the probability of using destructive conflict and violence to solve problems is so low that it does not enter into any party’s strategy, while the probability of using cooperation, problem-solving and dialogue to promote social justice, cohesion and well-being is so high that it governs social organization and life. He argued that this conceptualization and definition of peace suggests the need for indices and goals that track and prioritize both 1) the reduction of probabilities of destructive dynamics as well as 2) increases in probabilities of constructive societal dynamics.